Posted on February 24, 2013 by lifeaworkinprogress.com

I’ve heard of Weekend Retreats, Craft Weekends and Weekend Breaks. I had the latter – in my back!

I decided that my invasion of the guest bedroom wasn’t fair as I was gradually taking over all the available space, and when guests came it all had to be moved or hidden away [and usually never found again] The main bedroom already had my spinning wheel and sewing chests and the second bedroom had my eight shaft loom sitting prettily under window, but not getting used. 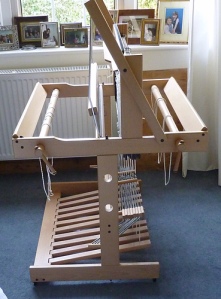 In fact it has never been used by me, and I am now thinking of selling it. I already have a four shaft table loom which I used quite happily with the same weaving width as this one, but thought I would be ambitious and do more serious stuff. However, sanity eventually returned and I realised I was really only a hobby weaver – not a production weaver  and that the day I sat down and took this Louet seriously was not  about to happen any time soon. SO I decided to dismantle it and pack it away. This was time consuming and much labelling and concentration was needed, but eventually all was safely stashed away.

Then I had the bright idea of switching all the bedrooms around to make a sewing area with the now empty space [I did say in an earlier post that nature abhors a vacuum didn’t I?] Well, if not quite a vacuum, a nice empty space that could be used very nicely thankyou. Units and their drawers were emptied and lugged about from one room to another, fabric unfolded and folded, paraphanalia everywhere. Rooms had to be rearranged and vacuumed and cleaned thoroughly [~so some good has come out of it so far] and I can see a very dim glimmer through my exhausted haze at the end of this long dark tunnel. If I have enough strength left tomorrow, I’ll take a few photos of the new sewing area to show you.

As ever I am left with stuff over and wondering where it all came from and where will it go, but I’ve been here before and no doubt will be again in the future. The danger lies in being waylayed by finding stuff and sitting down to become re-acquainted with a past fancy or interest and losing sight of how I got here in the first place. Needless to say no sewing has been done. How was your weekend?

I love all things creative and an eternal enthusiast. I am enduringly interested in absolutely everything remotely creative and never happier than when being shown 'how to'.
View all posts by lifeaworkinprogress.com →
This entry was posted in Uncategorized. Bookmark the permalink.

2 Responses to Back Breaking Weekend.