HOW WAS IT FOR YOU?

Posted on October 28, 2013 by lifeaworkinprogress.com

Clearly just a question for those of us in Southern England and I am, of course, referring to the ‘St.Jude Storm’. Overall, sadly 4 people have died and there have been some grim stories, but happily because we were warned in advance [and the railways shut down!] and what could be prepared for, was. Trees of course have a mind of their own. Some iffy ones were cut down in advance but over 113 trees fell on railway lines, but a lot more on cars and houses. The 4 fatalities were due to trees coming down, one in a grim twist of fate cut through a gas pipe and caused an explosion demolishing 3 houses and damaging 2 others. Two fatalities here. I would have passed these houses many times in the four decades I lived near Heathrow. Very sad. 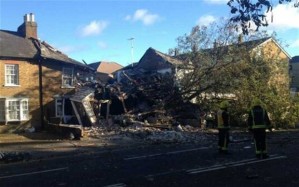 although this picture was in the media, it originally was published by the Fire Service.

We were relatively lucky. My back garden was flooded at the bottom and I lost one of my crab apple trees – at least it is lying on its side, but the roots are still in the ground so it might be salvageable. My runner beans and poles were slain, but then they would have been pulled up soon, so no problem there. My daughter Abi lost one of her apple trees and two fence panels. All pretty light damage considering what it could have been. We have some pretty large trees around and they all behaved themselves beautifully, thank goodness.

On the sewing front, Megan’s shirt is finished completely and a photo will be posted tomorrow [light permitting] and I have already cut out and prepped another shirt. I was pretty low on fabric for this one. Mainly because it is striped and I didn’t have enough length so had to use a bit of initiative placing and cutting out the pieces, but more of that another time.

I love all things creative and an eternal enthusiast. I am enduringly interested in absolutely everything remotely creative and never happier than when being shown 'how to'.
View all posts by lifeaworkinprogress.com →
This entry was posted in Uncategorized. Bookmark the permalink.