THINGS THAT KEEP ME OUT OF MISCHIEF.

Posted on April 23, 2014 by lifeaworkinprogress.com

My husband is a great fan of Wily Coyote and Roadrunner and at one time he persuaded me to make these;-

Coyote is actually holding a knife and fork in his hand, which got cut off  in the picture! I notice other bits and pieces missing on the other pictures too. As usual my photography leaves much to be desired. !They are rug hooked on hessian with ordinary acrylic wools.  I did start to do Roadrunner with strips of T-shirts, as seen below, but getting the right colour proved a pain, so I quickly swapped for the easier option, no cutting up of strips, yay!  I just drew the picture in felt tipped pen, and went round the figures in black wool to give them the ‘cartoony’ effect. DH had some weird notion of have them as padded head boards – needless to say that didn’t happen! 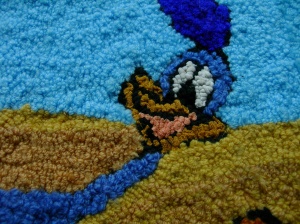 He got the idea after I made a couple of little rugs. One that has served as a bedside rug for about 10 years, and one that hangs on the wall. As with the others, I just drew with felt tipped pen and used a mixture of handspun and acrylics, whatever came to hand in the right colour. You don’t have to be DaVinci, the felt tipped picture gets covered over anyway so you can make as many versions of your drawing as you like!

It’s a good, easy and relatively cheap craft which is enormous fun and the only boundaries are   your imagination and how much odd bits of wool you can cadge. [Charity shops sometimes have oddment bins]Hooks were about £9 when I bought mine and I don’t think they are much more now. Children love it too and can do ‘modern art’ by just drawing squiggles in black and filling in the spaces in colours, rather like my first art classes in primary school!.

When I spin I often do just little samples for colour or weight or curiosity even. Often not enough to do anything with, except perhaps this 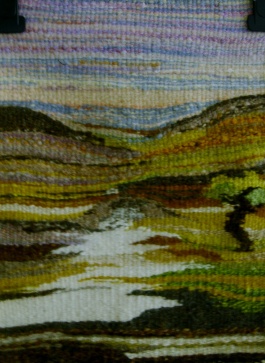 Hand-dyed and natural coloured wools, ‘tapestry’ woven on a simple wooden frame. No loom required, the ‘warp’ is ordinary string and I used a wool needle to weave.  When I started I had no idea of making a landscape picture, it just grew as I added bits in. Just a couple of things that keep me out of mischief.

I love all things creative and an eternal enthusiast. I am enduringly interested in absolutely everything remotely creative and never happier than when being shown 'how to'.
View all posts by lifeaworkinprogress.com →
This entry was posted in FIBRE CRAFTS. Bookmark the permalink.