NEW KID ON THE BLOCK

Posted on February 21, 2015 by lifeaworkinprogress.com

Last Monday I went to pick up this little lady. A thirty odd mile journey in the pouring rain. I was feeling quite excited, the picture on Ebay showed a 1950’s Singer 66 in what looked to be beautiful condition.

The pictures didn’t lie. The decals and paintwork were pretty good for the age of the machine. It either hadn’t been used very much or the owner really looked after it, there is no way of knowing. What I did very  quickly find out though was that there was no plug/lead or foot pedal! It had been listed as a ‘barn find’, which I presume is a euphemism for lucky find.  I’d picked it up in the middle of a housing estate in the town that John Betjeman had written his derogatory poem, not a barn in sight. It appears that it had belonged to the chap’s mother, but neither he nor his wife knew anything about sewing machines and had no idea where the pedal had gone. A pity that little detail hadn’t been in the listings, but it was still a lovely looking machine and I could always get a new foot pedal from Ebay hopefully.

Once I got it home that bad news hit. It was seized up solidly. The fly wheel could not be turned at all, not a centimetre! On closer inspection it seemed that the whole machine was covered in thick Marmite and lint balls.

Now I love to get down and dirty [with machines that is]. So – long story a bit shorter [not much] – I stripped everything and washed it down with acetate and then cleaned it up. A clean oiling and everything was moving once again after some hours, I might add!

I then felt confident enough to go online and buy a new motor and foot pedal from the very helpful Martin at ‘sewingonline’ at Ebay. I sent him pictures of the plug socket,

but sadly he didn’t have a lead/pedal in stock for that, so I got the set brand new instead [cheaper actually to do that]. I also bought a new rubber belt, a neoprene belt came with the new motor but I used the rubber one anyway as it went on easier. 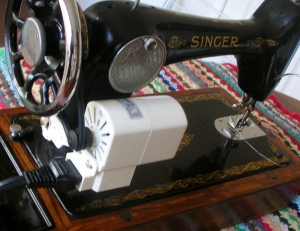 How glad I am that I did all that, because I now have this gem. It is a straight

stitch only machine with no reverse. It is however classed as a heavy duty machine on the lines of the 201, which I own and love dearly. So all in all I am happy with the machine, it cost me just under £80 in total which is a good result considering. I bought it for £40 [which I still think was a good bargain despite the problems] and I spent another £35 on the motor and foot pedal [including p.+ p.] and a couple of pounds on the rubber belt and a lot of elbow grease and enjoyable work. It still needs a little fiddling with tension, but it does sew evenly and fairly quietly. It is in a box base and that acts as a sound board I think, but it can’t be take out [I’ve taken it out to try] because the feed dog and stitch mechanism sits lower than the legs and would catch. I might pad the box, but it as it is fairly quiet anyway I might not bother. If you’ve managed to get this far without yawning, well done and thanks.

I love all things creative and an eternal enthusiast. I am enduringly interested in absolutely everything remotely creative and never happier than when being shown 'how to'.
View all posts by lifeaworkinprogress.com →
This entry was posted in Life a Work In Progress, Sewing, Works in Progress. Bookmark the permalink.

2 Responses to NEW KID ON THE BLOCK