Posted on March 26, 2016 by lifeaworkinprogress.com

With the emphasis on playing! Every now and then  my grand-daughter Harri and her young friend Mali come to play. We do a variety of crafts and generally have a load of fun with surprising results some times. [e.g.drawing on shoes, below]

Last week they came over to play hooky -[on rugs that is] .On their previous visit to make Star Wars models Mali had seen some that I had made ages and ages ago and chose that for his next project.

He had visions of the Superman logo and got stuck right in.

Unfortunately he found it wasn’t quite so quick and easy and he had hoped but at least he has the fundamentals, and that’s OK because the whole purpose of these sessions is to just widen the fun and enthuse. If he wants to he can pick it up again. It certainly worked with me and I soon got ‘hooked’ again and started this little picture, not quite sure what I’ll do with it though. [*credit/disclaimer; This is not my original idea for a picture as I saw this picture of Mrs. Rabbit [my name for her] originally on Pinterest, but can’t quite remember whose picture it was but it was under the heading ‘rug hooking’] 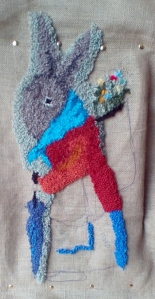 Roughly drawn on hessian in pencil and hooked with odd bits of DK wool. It has now got to this stage

I love all things creative and an eternal enthusiast. I am enduringly interested in absolutely everything remotely creative and never happier than when being shown 'how to'.
View all posts by lifeaworkinprogress.com →
This entry was posted in handmade, Life a Work In Progress, Uncategorized, Works in Progress. Bookmark the permalink.